How Fear, Uncertainty, Doubt are Used Positively for More Readership

What is FUD Psychology/Tactics (Fear, Uncertainty and Doubt)?

FUD tactics are meant to scare the customer into buying a product or using a service and rely on the customer lacking information to make a decision on their own.

However, this is how the current populace of marketers and bloggers describe FUD :

Fear, Uncertainty and Doubt are key emotions that when triggered (together or separately) at the right time and place, can encourage visitors in the correct direction which will ultimately benefit both; the value seeker (them) and the  value provider (you).

It is true that positive emotions trump negative emotions. But marketing operates within the gray area of black and white which is why FUD can and is used to persuade readers/customers to question their assumptions/capabilities in order to help them learn more and perform better.

FUD psychology was infamously used by the IT industry to out do each other by spreading false information about their competitor’s product. This resulted in increased customer retention, but as a result of psychological manipulation.

However, in the digital marketing landscape that operates today, FUD tactics are looked upon favorably because they get results. The emotions of Fear, Uncertainty and Doubt are now not used for consumer exploitation or manipulation but to enable them reach their business or professional goals more quickly and efficiently.

FUD tactics encourage people to question the realities of their business like “Am I really making money? Am I happy with my website’s traffic? Am I performing to the best of my abilities?“

Why are FUD emotions used?

“To inspire people to take action.”

The rationale of this concept lies in basic human psychology and how we behave everyday.

The problem is not that we don’t understand it. The problem is how can we apply these basic human emotions to functions that do not have face-to-face human interaction.

So, how does FUD positively affect target audiences?

To answer this question, one must first see the 3 key mental stages in the new age FUD process:

Stage 3) Anticipation of reward and satisfaction

The ultimate and final benefit of all this – your readers associate an emotion with your website or blog which is that of ‘a positive feeling’, and for which they will definitely come back for more.

Following is the detailed breakdown of the 3 stages –

‘Fear of being left behind’ & ‘Action’

It starts with ‘fear’. The fear of being left behind or missing out on an important advantage/edge if a particular action is not carried out. It can be an advantage pertaining to your business, job, skill-set and even personal safety. Readers subconsciously worry that if they do not read a particular post or don’t download an e-book then they might lose out on a report or insight which could have given them a competitive advantage.

The genesis of all this uncertainty? Content. Specifically – a headline or a single sentence carefully placed near a critical call to action element.

How content elements affect regular readers can be explained better with my own personal experience of being a happy victim of FUD tactics below.

[Note: The example draws on a small yet significant tactic to better help readers consume the information faster while understanding the phenomena in discussion]

I am a marketer at AdPushup. I know I’m writing useful content but then I’m struggling with writing good quality headlines that instigate people to read the said content. I know this is a problem in the back of my mind but I overshadow it with the good feeling that I am writing relevant content which is being well received by communities. That however does not undermine the fact that writing good headlines is still a valid concern for me .

Now while trying to practice writing good headlines in CoSchedule’s Headline Analyzer I get their pop-up email capture box. This is what it looks like:

Since I’ve been using the internet for so long I know that I will not solicit my interest in every pop up box that comes up asking me to take a particular action.

So naturally, I moved to click on the exit/cross/no-thank-you button but then I read the small copy on the link that was my way out:

The image was magnified for clarity which is why it is a bit blurred. Ironic, I know!

Now, the image below explains my mental reaction process on being forced to encounter the choice that in order to continue forward on their site, I have click on the link shown in the image above:

Subconsciously, your brain does not go to extreme lengths that you exactly think ‘… omg, this is life and death and I’ll be left behind so let’s click on the orange button which promises success‘.

It just hints at ‘you’ll lose an advantage‘ which is enough to get you to take action.

Know why people say: “I would rather have something and not need it than need it and not have it.” Well…

Why does FUD work positively? Only because of ‘Satisfaction’

The guys at CoSchedule were successful in introducing me into their marketing funnel. But why and when was I happy about this? When is any or all of this successful & why is this successful?

This entire process is successful because of the because of the reward at the end and the feeling of satisfaction. Not just any reward but a reward which makes it worthwhile the split second mental anguish that I or anyone goes through. I use the word ‘reward’ because what you are essentially doing is building up positive anticipation towards the end result. The end result where a visitor receives something. That something is an advantage, a solution, a reward.

A reward that validates that they’re concerns were genuine about having a lack of advantage. Once that advantage of the reward (in the form of your valuable offering) is obtained and its veracity checked, ‘satisfaction’ dawns.

The feeling of satisfaction that validates what you (‘the value provider’) were doing was for the reader’s benefit all along. Once this emotion comes in, a visitor is guaranteed to increase their interaction with you in order to get more of this positive feeling.

Melanie B. Tannenbaum, University of Illinois presented her research “Do Scare Tactics Work? A Meta-Analytic Test of Fear Appeal Theories” at the 25th APS Annual Convention in Washington, DC (2013). Her research concluded that an appeal to fear actually works as long as there is a moderator involved like ‘efficacy’ – “something that people can do to help eradicate the fear”.

Melanie gives a summary of her research on scare tactics

How do successful businesses or blogs use this? Essentially – by making a consumer’s journey of eliminating the uncertainty and doubt – emotionally charged but nevertheless short and giving a very valuable reward in the end. An over deliverance of value is what makes a reader a life long advocate or promoter of their service.

“Do companies really think this far ahead that they purposely place statements like the one in discussion above, right next to important call to action elements (“Download” button), CTA elements that are primarily responsible for getting visitors into their marketing funnel and then eventually through lead nurturing, convert readers into a paying customers/email subscribers/promoters?”

Yes, they do because it gets results. Results that are beneficial to the value seeker and the value provider.

Many of you reading this will have the uneasy feeling regarding FUD but ask yourself why?

I’ll leave the reasoning to yourself and reiterate that I am only describing how the psychology works.

In either case, FUD psychology isn’t used for manipulation today because of the damaging repercussions it can cause for businesses. Consumers no longer rely on traditional media outlets to spread grievances or whistleblow.  With viral news/content getting hits and shares within minutes, the internet has transferred power to the masses. Walking on such a slippery slope, the only thing that is keeping companies and individuals afloat is either their:

No one wants to jeopardize that by running wild experiments on their readers.

I’m also aware that I’m standing right on the edge of click bait territory so I’ll address your concerns with this question – Would you consider the following clickbait? Content published by the industry thought leaders and large publishers which get more than a million pageviews per hour?

Hubspot (on their homepage at the time of writing this blog. However, the content on the link is actually very valuable. I would suggest you guys take a minute to go through it)

Know which type of content got the most reactions on BuzzFeed in the last year?

People might dislike Buzzfeed and call their headlines clickbait-like but experts are not able to deny that the content behind that headline is actually great and provides more value than promised. Results > opinions.

This is the positive use of FUD and it got almost double the shares than their next best received content.

If you have any questions or comments, use the comments section to share them. 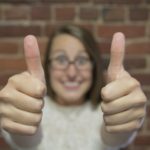 The Psychology of Happiness and How It Affects Our Writing

Google Mobile-Friendly Update: Everything You Need to Know